OK, so this post was going to be much longer and chock full of photos, but it seems that I have lost ~100 photos from the second half of the day. I've tried everything to try to recover them, but to no avail. BOOO!!!!

Not sure how it happened, but we both woke up pretty darn early on day 2. Since it was a nice day out, we decided to spend the day roaming about Cambridge. Neither one of us really knew what to expect; we just went with the flow of things.

Breakfast was a quick stop in Costa Coffee. I equate this place to a local Starbucks, only with better coffee. After breakfast while waiting for our train, we stumbled upon the famous Platform 9 3/4, by accident. J knew it was in the area, but wasn't exactly sure where.

Funny story. While in Cambridge, we were taking photos of the crazy large catholic church. A young woman stopped and asked us if we were from Oregon and if we were students. She was from Eugene, Oregon and was a student at Cambridge University. It took us awhile to figure out how she knew we were Oregonians. Were we dressed that obviously? Turns out, J had his Oregon State beanie on. Oh, duh!

We covered much of Cambridge on foot, soaking in the sunshine, blue skies, and victorian architecture. We were bombarded by people who kept asking if we wanted a punting tour.  Neither one of us knew what it was initially, but we knew we didn't want to partake. I'd show you pictures of the punting boats and the pretty river surrounded by lush vegetation  but those are all the pictures I am missing *sad face*. 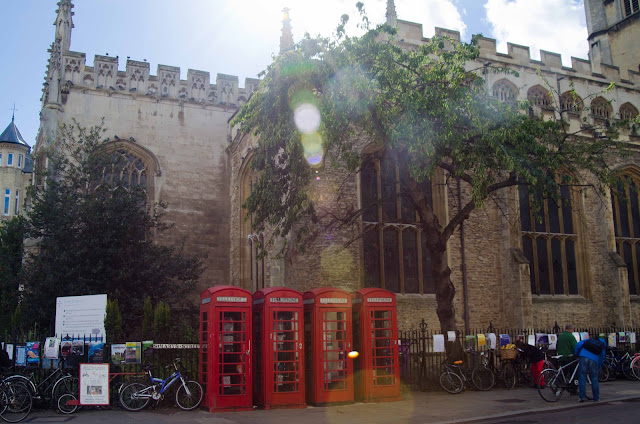 Any guesses to how many miles we covered?

We finished with Cambridge relatively early (~2:30pm), and it would be tea time by the time we got back to London. The plan was to walk from the train station to a tea place J's guidebook recommended. Yeah, well, we headed North, in the wrong direction. By the time we turned around and found the place, we were both hungry and wanted more than just a cup of tea and a pastry.

A couple of miles later, we found ourselves surrounded by lights and restaurants galore in the Soho neighborhood. A Moroccan/ Spanish place caught our eye and hushed our grumbling bellies. We stuffed ourselves silly at El Cantara Soho. We split the Barcelona feast which included chef's choice of 5 tapas appetizers, our choice (each) of a main dish, and a plate of mini baklawas (baklava).

Including our walk in Cambridge, we covered ~7.5 miles on foot!!


*All photos taken by me with Nikon D7000 unless noted.
Posted by Celia at 12:28 PM
Email ThisBlogThis!Share to TwitterShare to FacebookShare to Pinterest
Labels: Cambridge, London, sabbatical, travel, UK